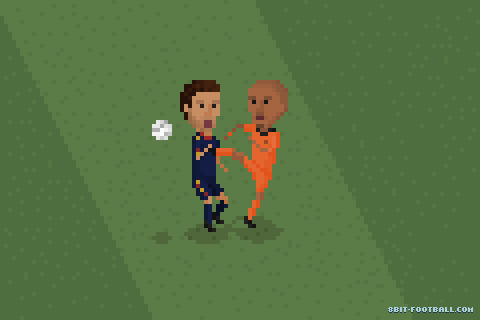 “We may not know how to play, but we can stop those who think they can.”

But with Pep’s line-ups, are we also seeing the end of the player known as the ‘enforcer’, the combative player whose job, at least in the Premier League, has traditionally involved semi-disguised violence and 5-yard passes?

After all, most City fans are petrified at the notion of going up against Europe’s best teams with just Yaya Toure protecting our defence if Ferna gets injured.

Fernandinho or even Fabian Delph are the guys at City who can best approximate the role of a midfield destroyer but are they tough enough?

Think of English football’s celebrated and masculine names of the past: Nobby Stiles, Billy Bremner, Vinny Jones and Roy Keane.

Guys that could ‘dish it out’ and ‘put it about’.

Guys who did not feel the need to ‘covertly’ cover their mouths with doltishly cupped hands when giving you the benefit of their opinions.

We had them ourselves once: think Dave Watson, Mike Doyle, Andy Morrison and Nigel de Jong. Remember the famous images of Doyle and Watson in their blood-spattered shirts holding aloft the league cup in 1976 at Wembley? Players who could stop an attack dead in its tracks.

Don’t City still need these types of player? Doesn’t every team? Don’t we need rollicking hair-drying leaders of men? Is this type of player going the way of the Dodo? With Pep, it’s looking a bit like it.

Upon recent performances and with his well-publicised quote: ‘What’s tackles?’ Pep appears to be on a mission to prove that tactics like the “reducer” should be consigned forever to the dark ages. Technically less proficient defensive/midfield ‘hard men’ may also be part of this.

After all, most of our supposed transfer targets are not this type of player at all but rather young, post-truth soccerball sat-navs who look like a young Roger Federer; former high school prefects with trendy hairstyles and high-viz boots who can get up and down the pitch effortlessly for 90 minutes and place a pass through the eye of a needle while keeping their kits nice and clean and their shin-pads intact and untouched.

For Pep, attack is evidently the best form of defence and the uglier aspects of the game can and should be avoided with slick passing-triangles and quicksilver speed of thought.

This is undoubtedly much easier-on-the-eye (and the soul), as witnessed when we joyfully strafed Spurs, Stretford, Chelsea and most others for long periods last season before coming unstuck.

Every side needs a bit of silk.

However nowadays, players no matter what their position must now have both silk and steel rather than being the archetypal one-trick pony of yesteryear. (Rodney Marsh, anyone?) A total footballer, you might even say.

I don’t know about you but when I witness Leroy Sané, David Silva, Raheem Sterling and Kevin DeBruyne in full-flight, romping gleefully forward and the same quartet plus Gabriel Jesus doing likewise, I have no warm fuzzy feelings for the days of Don Revie’s Leeds United.

Or even for those of the much-lauded Steven Gerrard and Paul Scholes and their particular brand of demented two-footed lunacy.

Intercepting a pass is now the highly-prized skill rather than the eye-popping body-to-body car-crash collision.

However for many, like ancient Roman nobility in the Coliseum, they still yearn for those days of Nigel de Jong and even Gareth Barry and some felt smugly vindicated last term when Pep‘s boys got caught on the counter.

This shadenfreude has brought out the worst in the many who squawk and bristle at Guardiola‘s ill-concealed disdain for crunching tackles – a hallmark of  ”the best league in the world’. Yet the received wisdom says that to win the Premier league you need a bit of nastiness. Alan Hansen famously once said: “You win nothing with kids.” What he might have said is: “You’ll win nothing without a few bruisers!”

Is this still true, Blues?

RTs, follows and comments @boltfromtheblu are much appreciated.