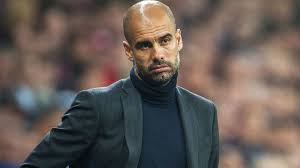 What was it going to take for Stretford to beat City in this season’s final derby? The one that would have given us our 3rd League Title in 7 years?

A morale-sapping loss in the previous game: Check √

Pogba & Sanchez FINALLY showing some form after a season of mediocrity: Check √

Two-nil up at half-time and coasting. A carbon copy back-to-the-future goal from Vincent Kompany to get us started. Sweet.

Applause and gushing praise coming in from all quarters.

The ticker tape was being readied. The champagne was on ice. The fake EPL trophy (a la Bayern) was being unwrapped.

Then something appeared like a dark cloud over the horizon. A ghost from the past that we’d hoped we’d exorcised. An introduction to all young City fans about what it means to be us: TYPICAL CITY. We snatched defeat out of the jaws of victory with a defensive collapse that needed to be seen to be believed.

Why did it happen? Simple. In our run to title winning glory, we have had no practice at defending.

Have you ever read the book Outliers by Malcolm Gladwell?

It relates the phenomenon of 10,000 hours of deliberate practice of those who are truly successful at anything. One example is that of The Beatles in Germany before they became famous. Slogging away in Munich Beer Halls, perfecting their chops and licks. Those hair-flicking and hip-swivelling moves that would later capture the hearts of fans both in Britain and America didn’t get made up on the spot.

Ringo Starr was no Keith Moon. He couldn’t just make that stuff up in the heat of the moment.

10,000 hours. 10,000 hours of experimentation. Getting it wrong and putting it right. It applies to everything in life. There can be no audition of a task under extreme pressure without deliberate practice – so the research would suggest. City have not had this under Pep.

Our system is to defend by not having to defend. We play a possession game. If you can’t get it off us, you are no threat to us. But sometimes teams CAN get it off us. Either through gegenpressing or good fortune or a combination of both.

In any match there are moments.

Moments when the opposition are in the ascendancy.

Perhaps it’s good that following the last 2 games, they are all onto us. In previous seasons we had no problem getting in our hours of deliberate practice,

Maybe next pre-season & in the season we will get our deliberate practice.

ReTweets and New Followers are greatly appreciated by @boltfromtheblu